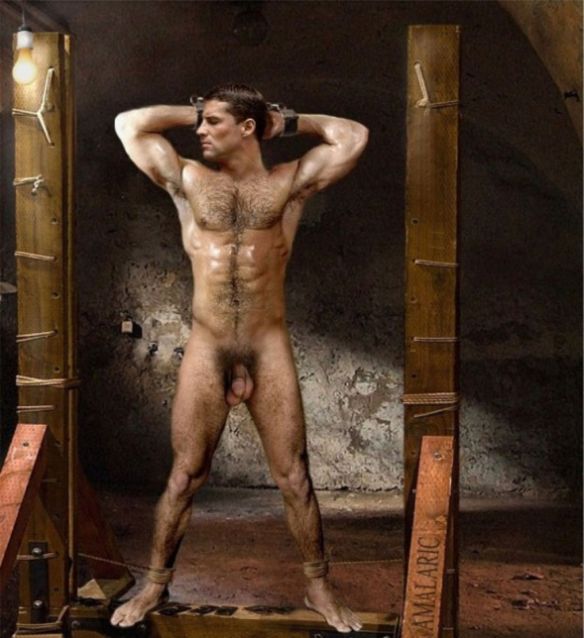 Buddy is a little behind on his settlements to his local bookie. Shouldn’t have used that insider information about Mr. Olympia, he thought was a sure bet.

Now, facing the bookie, “Where’s the money?” “You’ll get it as soon as I have it, won’t be long.”   “Not such a good answer.” Buddy suddenly finds himself surrounded by some pretty rough characters taking him in tow. Doesn’t look good for Buddy.

After a brief trip, then down a few flights of stairs, he finds himself in a basement chamber, stripped almost naked then taken to a wood frame and forced to stand on the raised base. Standing defiant in the torture frame, Buddy watches this thug sizing him up from top to bottom. His bookie asks again, “When will I get paid?”   “When I have it.” “Not the right answer.”

Buddy is now completely stripped, ankles tied to the upright posts and wrists shackled behind his head. Thug stands in front of him, flexing his huge fists. He approaches, slowly rubbing his clenched fist against Buddy’s flexed abs. Buddy tries not to show fear, but is betrayed by a light sheen of sweat.   A series of punches is applied to those six pack abs. Buddy looks away with clenched teeth, and tries to hide his pained expression as his abs endure repeated heavy pounding.

“How about now? Where’s the money?” No answer. Hands are now bound above his head to each of the upright columns. Thug now selects a large whip from a table filled with various ugly looking devices. With Buddy securely tied to the posts, a series of lashes are applied to his tender back. He tries to resist the scream caught in his throat, but eventually his screams fill the isolated basement room as his back is cut to pieces by the repeated lashes of the whip.

This could get really ugly for Buddy…